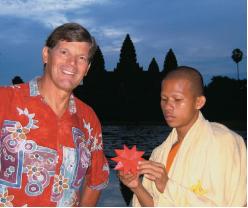 Sometime ago I had the pleasure to start discussing with Roger about creativity. Since creativity and innovation are closely related I decided to ask him if he could answer a small interview (which ended up not being that small), and he kindly accepted.

For those of you not familiar with him, Roger has been giving seminars and workshops to stimulate people’s creativity since 1977, and he has worked with many large organizations all over the world. He is also known for the books he wrote on the subject, the most famous being “A Whack on the Side of your Head”. Recently he started blogging also, you can check his blog here.

Now, without further delay, the 7 questions with Roger von Oech:

1) There are many different definitions for creativity out there, is there any of them that appeal to you or do you have your own definition?

Yes, there are a lot of definitions of creativity. One that has worked for me over the years is: It’s the process that produces ideas which are both a) new and different, and also b) have some application or feasibility in a particular context. Thus, my definition of creativity emphasizes both originality and practicality.

One other thing, let’s suppose that you really are thinking about going into the retail clothing business, and you have the above idea. It is truly original. If you ask yourself: “How can I play with the idea to make it practical“, then you might end up with a creative idea. In other words, you look at this strange idea and decide to use it as a “stepping stone” to an idea that is both original and practical.

You might play with the idea of “Venus” and say, “if I look at Venus not as a planet, but as a metaphor for a place of love, what ideas does that give me?” And this could lead to all sorts of possibilities such as: clothing emphasizing romance, making the store like a love den, selling other “love” accoutrements in the store, promoting the store as the place where it’s “Valentine’s Day” all year long, etc. Of course, the marketplace and your own business abilities will ultimately determine how practical the ideas are.

2) Considering you have been consulting, writing and speaking about creativity for the past 30 years I assume that creativity is not something we are born with but rather a skill we can develop. How fast, however, can people be trained to become more creative?

Actually, I do assume that part of our genetic inheritance as human beings is the ability to look at the world in new and different ways. And just as some people can run faster or jump higher than others, the ability to think creatively is not evenly distributed. But we all have it to some extent. But many people tend to lose their creativity as they go through the school system and become socialized into adulthood.

And, yes, I think there are strategies you can employ to bolster your creativity. I wouldn’t be in this business if I believed otherwise! My books and card decks contain a lot of these strategies. My basic style is fun and informative (at least I hope it is).

3) You have worked with many of the largest organizations in the world (IBM, Microsoft, Dupont, CitiGroup, Disney, Sony, just to name a few). What role does the corporate culture play in stimulating creativity among the employees?

It plays a very significant role. If you’re part of a work culture that encourages — and expects — you to come up with innovative ideas, then you will probably look for ways to come up with different approaches to solve traditional problems.

One thing I recommend is that companies put a “innovation requirement” in people’s performance plans. If people know they’re going to be measured — and rewarded — for coming up with ideas, then they’ll put part of their workday focus in looking for innovative solutions. It also helps to give them the skills and tools to think creatively and implement innovative change.

4) In the near future I am planning to start my own company. Should it become successful I will need to hire some people, and probably I will want creative people to join my team. How can you understand if someone is creative? Is there any way to test it?

Talk to them, spend time with them, talk with their colleagues. Give them some open-ended problems to solve. See how many ways they can solve them. Do they rely on just one approach, or are they able to approach the problems from several points of view.

Do they have a sense of humor? I think that’s very important: there’s a close relationship between the “ha-ha” of humor and the “aha” of creative discovery. Can they laugh at themselves? Do they have wide interests that go beyond the narrow confines of your particular field? Do they seek out ideas and information from outside areas and disciplines? Do they have any offbeat hobbies? That’s a start.

5) I like to define invention as new concepts or products that emerge from individual’s ideas or from scientific research. Innovation, on the other hand, refers to the implementation (or commercialization) of the invention itself. According to you what is the relationship between invention, innovation and creativity?

Some of this is just semantics. But this is how I carry these words around in my head. For me, “creativity” is the ability to come up with original and feasible ideas. There are many fields and domains where one can do this. “Invention” (for me) typically refers to a specific product or service that is new. I tend to think of “innovation” as being more in the realm of industry, business, and commerce. And I think of “innovation” as getting a larger enterprise to change. But these are just my definitions.

6) I am very curious about your Ball of Whacks (a piece composed of 30 magnetic blocks that can be taken apart and rearranged in many different ways). How can such an apparently simple object function as a creativity tool?

I like to think of the Ball of Whacks as a “creative stimulant” and “mental freshener.” A large part of the human brain is given over to hand and eye functions. Playing with the individual pieces — they are actually rhombic pyramids — and making various shapes and forms with them will get your brain going in a way that just reading or sitting at a computer does not.

I also like to the think of the Ball of Whacks as a “creativity” workshop in a ball.” I wrote a 96 page illustrated guidebook that provides the user with some creative strategies and exercises he can employ. Playing with the Ball of Whacks is also a lot of fun.

7) Final question, are there any simple exercises that people can do at home or in the office to stimulate their creativity?

I think the easiest — and most powerful — creativity strategy you can employ at home or in the office is this: “Look for the second right answer.” When most people have a problem, they stop with the first right answer they find. That approach is fine for certain problems — mathematical ones come to my mind. But most problems have a variety of answers, and if you stop looking after you find an answer, then all the good alternatives will go undiscovered. But if you look for the second, and third, and fifth right answer, you are more likely to get some good creative alternatives.

For example: I’m holding a pen. What is it? A writing device — the first right answer. But what are the other right answers? It’s a pointer. A coffee stirrer. A telephone dialer. A weapon. A hole punch. An emergency tracheotomy tool. An advertising medium.