So far we have already covered three models that analyse what companies will be in a better position to innovate and under what circumstances (Schumpeter, the Incremental – Radical dichotomy and the Henderson – Clark model) and one framework that outlines the introduction, growth and maturation of innovations and technological cycles (the S-Curve framework). In the fifth part of the series I will present the Teece model, which can be used to predict who will profit from an innovation and to understand what company will have higher incentives to invest in certain innovations.

David Teece clarified that two factors – imitability and complementary assets – will have a strong influence in determining who will ultimately profit from an innovation. Imitability refers to how easily competitors can copy or duplicate the technology or process underpining the innovation. There are many examples of barriers a company could use to protect itself from imitation, including intelectual property rights, complex internal routines or tacit knowledge.

Consider the case of RC Cola, it was the first firm to introduce a diet cola on the market, but since it could not protect itself from imitation soon Pepsi and Coca-Cola jumped in, and using their complementary assets (distribution channels, brand name, etc.) they appropriated all the profits of the segment. Complementary assets, therefore, are equally important. They include any activity that gravitates around the core innovation such as distribution channels, reputation, marketing capabilities, strategic alliances, customer relationships, licensing agreements, among others. 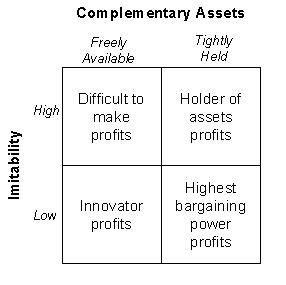 The Teece model can be used not only to predict who will profit from an innovation but also to understand what company will have higher incentives to invest in certain innovations. The threat of imitation and the importance of complementary assets had already being used under other frameworks, but usually they were employed individually or were used to dissect the overall market structure (i.e. Porter’s Five Forces) and not the innovation dynamics. The major flaw one can find the this theory is the lack of empirical evidence, which results from the diffculty to isolate the imitability and the complementaity effects from other factors.