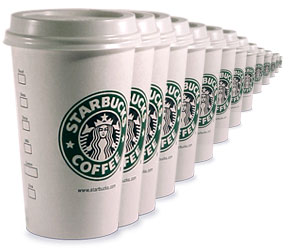 When Howard Schultz became the President and CEO of the Starbucks Corporation in 1987 the company was selling basically whole-bean coffees, and it counted dozens of stores across the United States. Less than 20 years later Starbucks is one of the most popular brands in America. It has more than 12,000 stores around the world, 140,000 full-time employees and a market capitalization of $27 billion. Considering such a huge success and the fact that Starbucks is entering most of the international markets (including western Europe, China, Russia, Brazil, among others) one can not help but question: “Why Starbucks is not present in Italy?”.

The big turning point for Starbucks occurred when Howard Schultz visited Italy on the mid 1980s. He was marveled at the atmosphere he encountered within the espresso bars. People talking to each other like close friends, the barista pulling shots of espresso coffee with a smile stamped on his face and the clerk joking around and calling the clientele by their names. More than a bar those places were active community spaces. Schultz compared the experience to being inside of a “great theater”, and he was absolutely sure that he would have success if he managed to export it to United States.

The evolution of Starbucks certainly absorbed some of the Italian coffee tradition, but it was structured around the American society. Despite being inspired on the Italian culture, therefore, it is probable that the Starbucks model would not fly in Italy.

The coffee experience for Italians is much more personal and intimate than what any Starbucks store would be able to offer. It is about “slow food” as opposed to the American “fast food”. Just think about the plastic cups, for instance, Italians do not like them. Why? Because they do not even consider the possibility of taking the coffee outside of the bar and drinking it while walking or driving.

Should Starbucks risk its image?

If Italy was all about “slow food” McDonald’s or Burger King would not be selling there right? Starbucks could try to enter the Italian market and use a clever marketing strategy to change the customer perception about its product offering, proving to everyone else that its espresso coffees are good even for Italians!

There is one simple reason why they are reluctant to do so. The benefits of trying and succeeding at the Italian market are by far smaller than the losses of trying and failing. Should they win the bet they would increase their international revenues, Italy drinks a lot of coffee after all. Should they lose the bet, however, they would lose not only money but they would be damaging the corporate image.

The whole Starbucks deal was inspired by the Italian coffee tradition. Starbucks is tremendously successful because it is not selling coffee but rather a charming experience. When you order a Cappuccino inside a Starbucks store you will not just get some espresso coffee topped with steamed milk, hell no! What you will get instead is a bit of Florence, a bit of Rome… and the experience will recruit all your senses, making you feel unique and sophisticated.

Now, should people start reading on the newspapers that Starbucks is having trouble to sell its coffee in Italy it is very likely that the whole glamorous experience just described would get shattered.

Starbucks’ decision to not enter the Italian market could be strategically correct. The Italian people would be reluctant to abandon their traditions, and the risks of an eventual failure out weight by far the possible rewards of succeeding. The image about the espresso experience is a corner stone of Starbucks’ business model, and they are not risking to damage it.