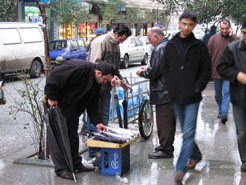 Have you ever noticed that in a matter of minutes after it starts raining the railroad or metro stations are already packed with umbrella vendors? The rain naturally boosts the demand for umbrellas, and those guys know that they must react as soon as possible in order to increase their profits.

The business world is no different. In our fast paced economy change is the only certainty, and the faster companies are able to respond to such changes the higher their chances of success. The ability to respond and adapt quickly to market changes, in fact, is a source of competitive advantage.

Wal-Mart is a good example of how a firm can use the responsiveness to change to reduce its costs. The retailer giant has a very efficient distribution and purchasing system, based on real-time data collected through its many point-of-sale terminals. Such information enables Wal-Mart to reduce drastically inventories and stockouts.

As we mentioned before the ability to respond quickly to market changes can also enable a company to develop a differentiation advantage. The fashion industry is extremely volatile, and predicting how the customers’ taste is going to change over the next season is very valuable. Zara, the Spanish apparel retailer, managed to differentiate its product line by responding faster to changes on the demand. Its extensive network of stores collect information in real-time about the request for different garments, colors and styles. The information is analyzed and within two weeks Zara has the new models being delivered to the stores.

As Charles Darwin once said: “It is not the strongest of the species that survive, nor the most intelligent, but the one most responsive to change.”