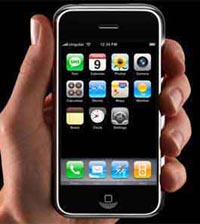 On the 9th of January Apple announced the the long-waited iPhone. Packing up to 8 GB of memory, a 3,5 inch touch screen with a virtual keyboard, Wi-Fi capabilities and running Apple’s OS X software the device was acclaimed both by the Macworld fanatics and by the general public. Apple’s stock price, in fact, soared right after the unveiling, going up by 7%.

Considering all the buzz that the iPhone generated we can assume that it will disrupt the mobile phone industry and make Apple hit the jackpot again, can’t we? Well, I would not be so secure about that. While I admire Steve Jobs’ initiative to invade a challenging business such as the mobile phone one, I think that Apple’s strategy has some flaws, and below I will outline each of them:

1. The mobile phone market is not the digital music one: Apple did something unbelievable with the iPod, redefining a whole industry (the digital music one) and placing its MP3 players in hands of more than 70 million people. No wonder they are so confident about exporting the iPod success into new segments. When Apple entered the digital music segment in 2001, however, there were no dominant players and the segment was relatively immature. Most of the people purchasing an iPod had no prior experience with MP3 players, meaning that Apple only had to convince them about buying the product (and not about ditching an existing one). The mobile phone industry represents quite a different situation, where virtually every single person already has a phone, sometimes with complex subscriber plans on the background.

2. Competition will be fierce: do you remember Diamond Multimedia or Sensory Science? Probably not, but those were the companies producing the first MP3 players, and they were also the competition Apple faced when it decided to enter the digital music industry. The iPhone, on the other hand, will face competition from the likes of Nokia, Motorola and Samsung. Those players do not only have deep pockets, but they are also among the most innovative and design-oriented companies in the world.

3. Apple’s user experience will be affected by Cingular’s user experience: analyze Apple’s history and you will see that its success was always derived from the ability to integrate hardware, software and services. Such integration enabled Apple to create an incredible user experience, like in the Mac-iPod-iTunes combo. The iPhone, however, will enter the market through Cingular, meaning that the service part of the equation will no longer be under Apple’s control. This will reduce Apple’s flexibility and it will also force customers to interact with Cingular, which is not as hassle-free as using an iPod, you can bet.

4. The touch screen might not be suitable: are we sure that a 3,5 inch touch screen is suitable for a mobile phone? If you consider how the average person uses a mobile phone you will see that the object must be somewhat resistant to shocks and scratches, after all it is constantly being handled, getting inside and outside of pockets and bags and sometimes even falling to the ground. Apple already had trouble some time ago when customers who bought the iPod Nano started complaining about how easily the screen got scratched.

5. Lack of a keyboard: whether you like it or not most people use the mobile phone to make calls and to send SMS (Short Text Message). Sometimes you need to make those calls on the run, while walking or driving, and the last thing you would need is to be forced to look at the mobile phone as you dial.

6. The $500-$600 price tag is conflicting with the demand: the iPhone does have a sleek design, a user-friendly interface and a strong orientation towards the entertainment dimension. Those characteristics will certainly make the device appealing for young people. That customer segment, however, is not the segment that spends $600 for a mobile phone. If you take a look at the phones from the four major US wireless carrier operators you will realize that there is no single product selling above $500, and in 2006 the percentage of phones that were sold for more than $300 account for less than 5% of the market.

7. Lack of 3G support: the OS X software coupled with the other features included on the iPhone will enable people to use a myriad of Internet application, bringing mobile connectivity to another level. Well, at least in theory, because in practice Apple will need to solve some issues related to wireless networks. The iPhone will work with 2.5G EDGE networks and not with the 3G UMTS and HSDPA as the latest mobile phones. EDGE networks can carry data up to 340 kbits/s while current UMTS handsets have a bandwidth of 3,6 Mbit/s.

8. Battery life: battery life is an important issue for mobile phones. Apple stated that the iPhone will have up to 5 hours of talk/video/browsing. However, there is no disclosed specification for standby time, nor any real-life performance data confirming those numbers. The large number of features included on the iPhone is making some people wonder whether the battery will have enough autonomy for a day-to-day usage.

9. Lock-in strategy: the iPhone was developed under a lock-in perspective. Should you buy music on the iTunes it will come with the FairPlay copy protection (even the music industry is starting to understand the drawbacks of strict DRM). Secondly, unlike with the Treo or other smartphones, you will not be able to touch the software of the device. Lastly, the iPhone is also locked to Cingular’s wireless network, meaning that consumers will not be able to switch to another carrier.

10. Apple will need to live up to the expectations: Apple stated that they want to sell 10 million iPhones in the 2008 fiscal year. That is not an unrealistic number considered that mobile phone manufacturers are expected to ship almost 1 billion units in 2007. Should they fail to reach that goal, however, it will become a huge disappointment. Just for the sake of comparison, Research in Motion sold 5,5 million Blackberries over the past 12 months, and people call them Crackberries…