In the first part of this series we have examined one of the first academics to study innovation management: the Austrian economist Joseph Schumpeter (click here to read the first part). We have seen that there was no empirical evidence to support Schumpeter’s theories that associated a company’s ability to innovate with its size. In the following decades many authors started exploring other factors that could possibly explain why some firms were very good dealing with innovation while others failed miserably.

As we have discussed in the part 2 the first widely recognized theory to appear was the Incremental – Radical innovation dichotomy (click here to read the second part). Although the model explained many innovation patterns and presented strong empirical evidence it is clear that over the last decades, with the advent of the Information and Communication Technologies and with the acceleration of change in most industries, it lost some reliability. In this part we will cover the Henderson – Clark model, which complemented to a great extent the Incremental – Radical dichotomy.

Henderson and Clark noticed that the Incremental – Radical dichotomy alone was not enough to explain what company would be in a better position to innovate and under what circumstances. They started wondering, for instance, why some incumbents would fail to catch something as straight-forward as some incremental innovations, just like Xerox failed to develop a small plain-paper copier even when it was the leader in xerography technology. The investigation led them to divide the technological knowledge required to develop new products, and consequently to introduce innovations, along two new dimensions: knowledge of the components and knowledge of the linkage between them, called architectural knowledge. 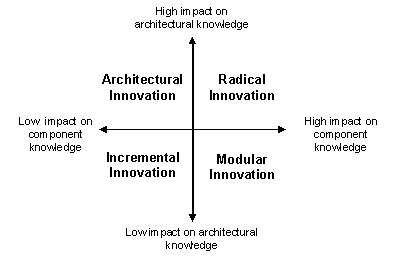 In order to exemplify the four possible innovation cases I will use the hard disk, a product that evolved dramatically throughout its 50 years of existence. According to the Henderson-Clark model an incremental innovation will build upon existing component and architectural knowledge. If we consider the hard disk, an improvement in the magnetic disk capacity and a faster rotation speed represent two examples of incremental innovation.

The hard disk industry went through several waves of miniaturization, the first mainframe computers were packed with 14-inch diameter disks, after some years the industry came out with 8‘, 5,25‘, 3,5’ and 1,8‘ disk drives. Each and every time the size of the hard disk diminished the knowledge of the linkages between components was evolving, while the single components were using pretty much the same technology, as a result we classify such changes as architectural innovations.

Finally, when a certain innovation revolutionizes both component and architectural knowledge it will be a radical innovation. Once again if we consider the hard disk industry one example of a radical innovation was the passage from magnetic to optical technology. The introduction of the laser in the disk drive industry required not only new components but it also changed the configuration of such components inside hard disks.

It is clear now that even if some innovations might appear incremental at a first sight this may not be the case, it is necessary to analyse how it impacts both component and architectural knowledge. Companies, therefore, must be careful in distinguishing between incremental and architectural or modular innovations because the competencies and strategies required to exploit one might not suit perfectly the other, if at all. Canon was able to invade Xerox’s turf because it developed the right architectural knowledge required to re-design the photocopier machine with smaller dimensions.

You can find more information regarding the Henderson – Clark model in the working paper “Architectural Innovation: the reconfiguration of existing product technologies and the failure of established firms“, Administrative Science Quarterly 1990.